I've loved participating in Writers Victoria Flash Fiction challenge that continued everyday throughout April. This wonderful organisation does a fabulous job supporting writers and celebrated their 30 year anniversary by challenging us to a string of 30 word stories, inspired by a different prompt each day. In response to several queries about where my contributions can be read, I've posted them all here. As well as responding to the daily prompt, my stories are inspired by life and current events. I hope you enjoy reading them as much as I loved writing them.

April 1 #grit
Knew he was made of tough stuff. Relentlessly survived Fluffy’s evil attentions. This morning his cage was empty, save for a carpet of yellow grit and a single golden feather.

April 2 #irritation
Bert’s sneezing was relentless. Between Bert and the mosquitoes Elsie’s irritation was tortuous. She didn’t mean for Bert to expire. Not really. But how to explain the empty Raid cans?

April 3 #diving
Jeremy fell forward, diving straight into the pool. He emerged warm and sticky. And sweet. Pulling away the blackened goggles he looked around. Chocolate. And Dominic. Holding something. MARRY ME?

April 4 #freshwater
5am. Jack launched his fishing trawler. First light he saw it. A floating carpet of fish. Seals. A shark. All dead. Oil? He tasted the water. The sea was freshwater.

April 6 #freedom
‘I forgive you,’ she said earnestly. She was never going to forgive him. Secretly she was glad. Relieved. Quietly rejoicing. Most of all she looked forward to reclaiming her freedom.

April 7 #saltwater
‘My ancestors fished here once,’ Karri told the school group. ‘See these shells?’ She pointed to the ancient fossils. ‘We’re 400km from the sea. But once this desert was saltwater.’

April 10 #shell
When the paramedics arrived the place was already deserted. Even the caller was gone.
‘Is there an exact location?’ Jimmy asked.
‘Over here, the sound shell,’ Lauren called. ‘Too late.’

April 11 #trapped
The young woman called police. Again. For her trouble they fined her. Wasting police resources. The harrassment continued. Trapped now between police and her stalker, she was vulnerable. Terrified. Murdered.

April 15 #tears
1944. The child discovered her friend after the bombing. A boot. His silent body by the hedge. Leaves dotted with a constellation of sacred beads. A cascade of vermillion tears.

April 18 #precious
‘Life without the bees will be no life at all,’ the naturalist’s prophecy rang out from the screen. ‘It’s not just the precious honey we’ll lose. It’s our precious lives.’

April 19 #despair
Our angel watches from way up there. She contemplates our sorrow back here on Earth. But today her despair has yielded to joy—her daughter will soon be a mother.

April 20 #lustre
Winter despaired. She’d entrusted Jacob with everything, even left her family. Caressing the glassy skin of her crystal ball, she stared as its luminous essence swirl. Then its lustre faded.

April 21 #beginning
‘When was the beginning?’ asked the seven year-old.
The celebrated physicist smiled. ‘13.8 billion years ago. The Big Bang.’
‘No,’ she said, dissatisfied. ‘The very beginning. Before the Big Bang?’

April 22 #inventive
Elsie tossed the newspaper into the bin. ‘Cancel the paper,’ she instructed her son. ‘I’ve had enough. Rape. Murder. Torture. Terrorism. How many ways can people invent to hurt others?’

April 23 #celebrate
For too long Miriam had nothing to celebrate. But now her father was so sick he’d been medivacced to the mainland. She beamed as she stepped through the hospital doors.

April 24 #transform
‘Who are you and what have you done with my son?’ Janine mocked affectionately. Lenny’s apartment was clean. He was paying his own bills. On time. Her heart swelled. Launched.

April 25 #remember
Gabrielle reluctantly drove Sophie to the clinic. She was anxious to avoid disappointment. It’d been a long time, maybe too long. The spaniel bounded towards them. ‘She remembers,’ Sophie cried.

April 26 #iridescent
Lucy paced the garden and the street. It was pitch outside. And cold. Impossible to find a missing kitten. Then she saw it. Two tiny iridescent moons tiptoeing towards her.

April 27 #nacreous
The child couldn’t have known what she’d stumbled upon. As it turned out, Wilson had lain there 100 million years. Only an opaline protrusion remained, marking the ichthyosaur’s desert grave.

April 28 #treasure
She approached cautiously. ‘Is this for me?’ she wondered.
A carpet of brilliant blue treasures preceded the exquisite bower.
Cocking his head, flashing his dazzling feathers, he invited her inside.

April 30 #pearl
The possibilities were endless. Confusing. Then she emerged, the soft smoky silver of her new fur awakening the memory of grandma’s precious beads. She mewed faintly, whispering her name. Pearl.

Writers Victoria celebrated one winner each day, and I was lucky enough to receive this honour on April 29, with my response to the prompt #perfectionism. All of the daily winners can be read here at Writers Victoria. Take a read - some talented and inspirational writers there. Love flash fiction and cannot wait for the next challenge. 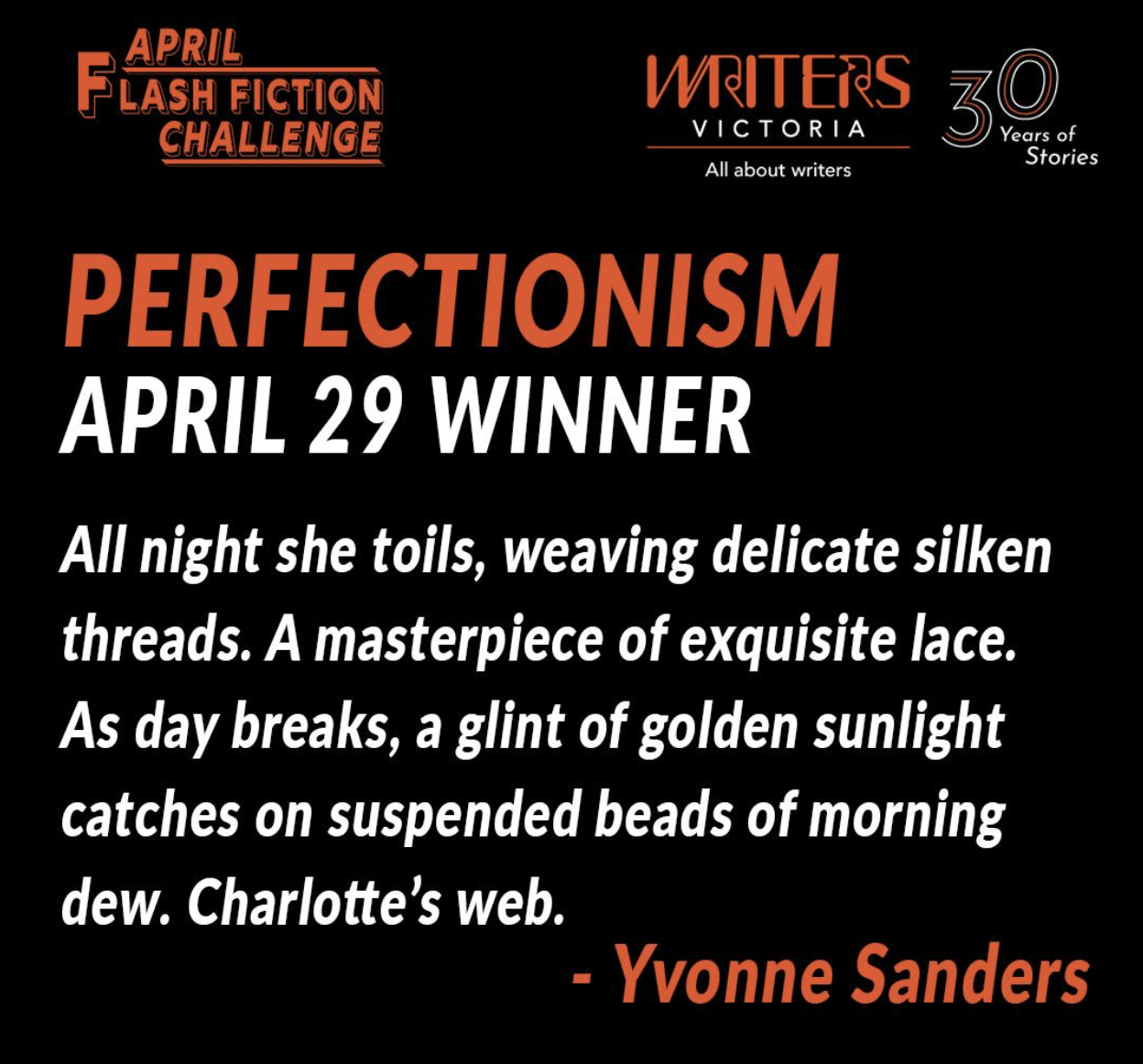 Congratulations to Writers Victoria on 30 years of being! I've been a member for several years and always love the fabulous opportunities presented for writers. To celebrate this auspicious anniversary WV hosted a micro fiction challenge, inviting us to flex our creative muscle and respond to a new writing prompt every day of April and fitting the entire story into 30 words! WV selected daily winners and published these each Tuesday throughout the month.  So excited to win one of these!!

This is my winning entry responding to the prompt #perfectionism on Tuesday, April 29... YAY!!!